Grebes’ legs are so far back on its body it can hardly walk, making breeding on land a challenge. Wānaka has built floating nest mounds to help them out!

In 2012 retired zoologist John Darby and volunteers made floating wooden platforms to create artificial nest sites for the Grebes around Wānaka marina. The project has so far resulted in 70 breeding attempts and 153 chicks being fledged from the marina. Crested grebes are extinct in the North Island and are endangered in the South due to predation by stoats and ferrets, loss of shoreline nesting habitat and disturbance by boats. Now in his 80s, Mr Darby has begun the process of handing the project, particularly the heavy work, over to Wanaka Primary School teacher Markus Hermanns.

The statistics for 2019-2020 are not good. There were 19 breeding attempts and 55 eggs were laid. Only eighteen chicks were hatched.  Of the 31 eggs collected and examined, 11 were fertile. 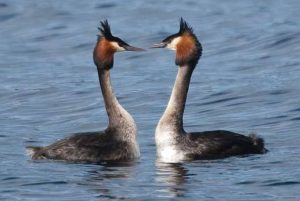